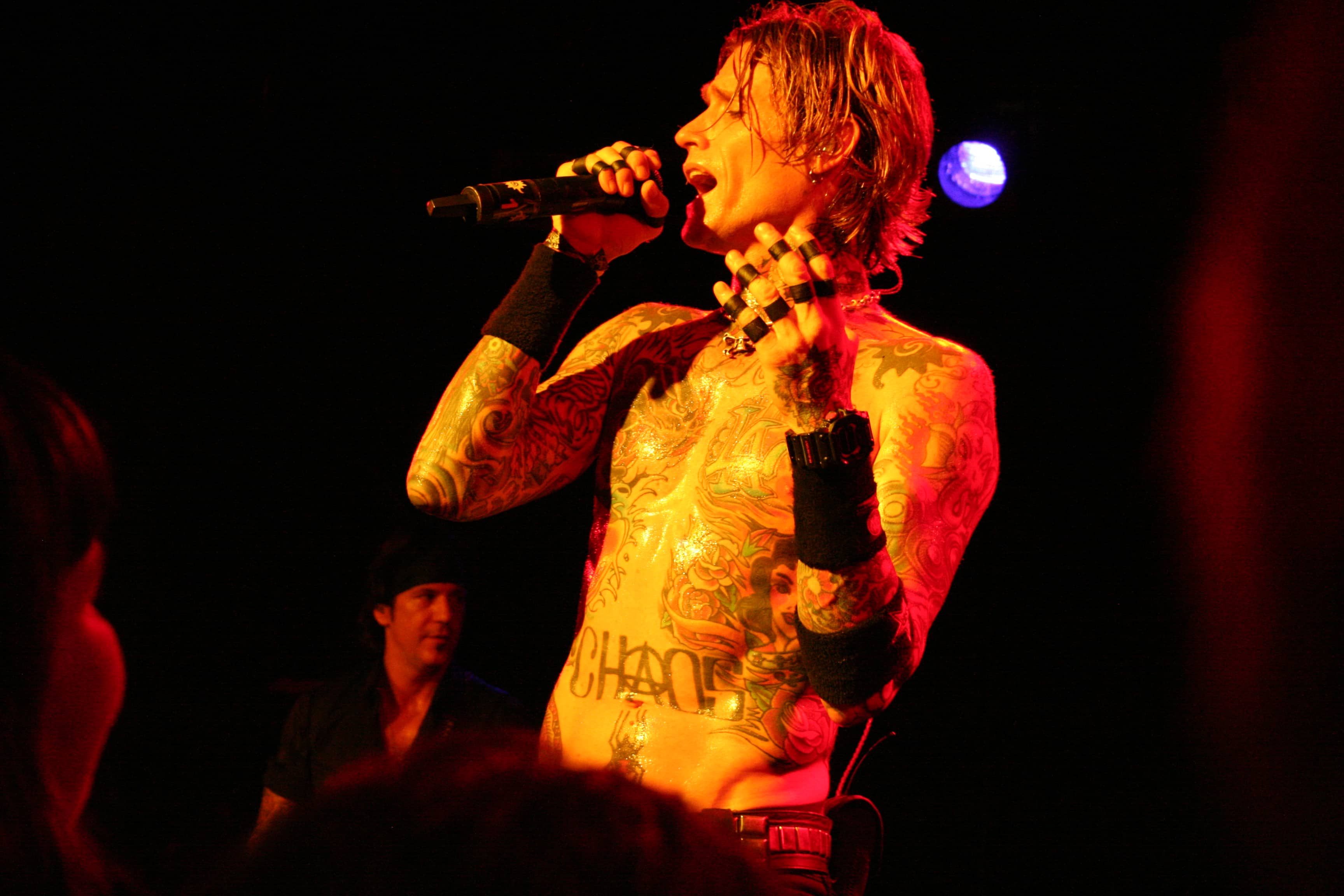 The atmosphere is choked with heat and frenzied anticipation; the whole of the audience steadfastly pushes themselves ever closer to the stage and here at the Roxy we are filled to capacity a full two hours prior to the band’s appearance. It’s Friday August 19, the second day of the Sunset Strip Music Festival and there are stacked lineups in every club. Though walking down the strip earlier the eager flow of fans heading to the Roxy makes it evident Buckcherry is the hot ticket.

There’s no band out there that sounds quite like Buckcherry, and they, in turn, do not attempt to mold themselves to the rock trends of the moment. What they are is a straight up in your face, nefariously fun, outlandishly sexualized, loud-as-hell Rock n’ Roll band. The Buck’s; Josh Todd (vocals), Keith Nelson (bass), Jimmy Ashhurst and Stevie D. (guitars) and Xavier Muriel (drums) just released a fifth album All Night Long under the independent label Eleven Seven Music. It comes more than a full decade after the debut of self-titled album Buckcherry (1999) and may be their strongest, most cohesive effort to date.

When the curtain finally rises, the darkness of the club is transformed by luminous die-hard fans and drunken appreciators who seem to cherish an anomalous kinship with Buckcherry. The show is rife with heavy guitar riffs and a colossal energy and before the second song is over Todd and Stevie D shirts are off, exposing a choice collection of tattoos. While Todd bellows lyrics and struts around comically thrusting his pelvis at the audience Ashhurst and Stevie D spew a virtual storm of guitar picks at the audience in between chords. Note: a roadie is on hand for the sole purpose of filling the mike stands with picks; which fly out at the audience as fast as he refills them.

Buckcherry has survived many ups and downs over the years, including the critically slammed Timebomb (2001), dissolution of the band in 2002, reforming with a new lineup in 2005, a number of lawsuits, and the general havoc that comes with being a modern day music outfit. However, Buckcherry seems to be having fun writing and performing and is already working on their next album, scheduled for release in 2012.

In a constant music evolution, which forever seeks to discover a more complicated and at times clandestine form of audio science in the name of progress and intellectualism, we sometimes forget that music is fundamentally about having a good time. Buckcherry is the perfect band to knock the audio geek right out of us. Most of their songs are about as cerebral as a kick to the groin. On stage Josh Todd personifies an adolescent fuck machine buying off the proverbial monkey with melodic chaos; phallicising the microphone, the stage, and whatever else he can get his hands on in the process. We love Buckcherry because they are fun, hard, primordial rock with plenty of demons and no bullshit additives.