Dolchnakov Brigade: Who are they? And what, pray tell is Palevish!? 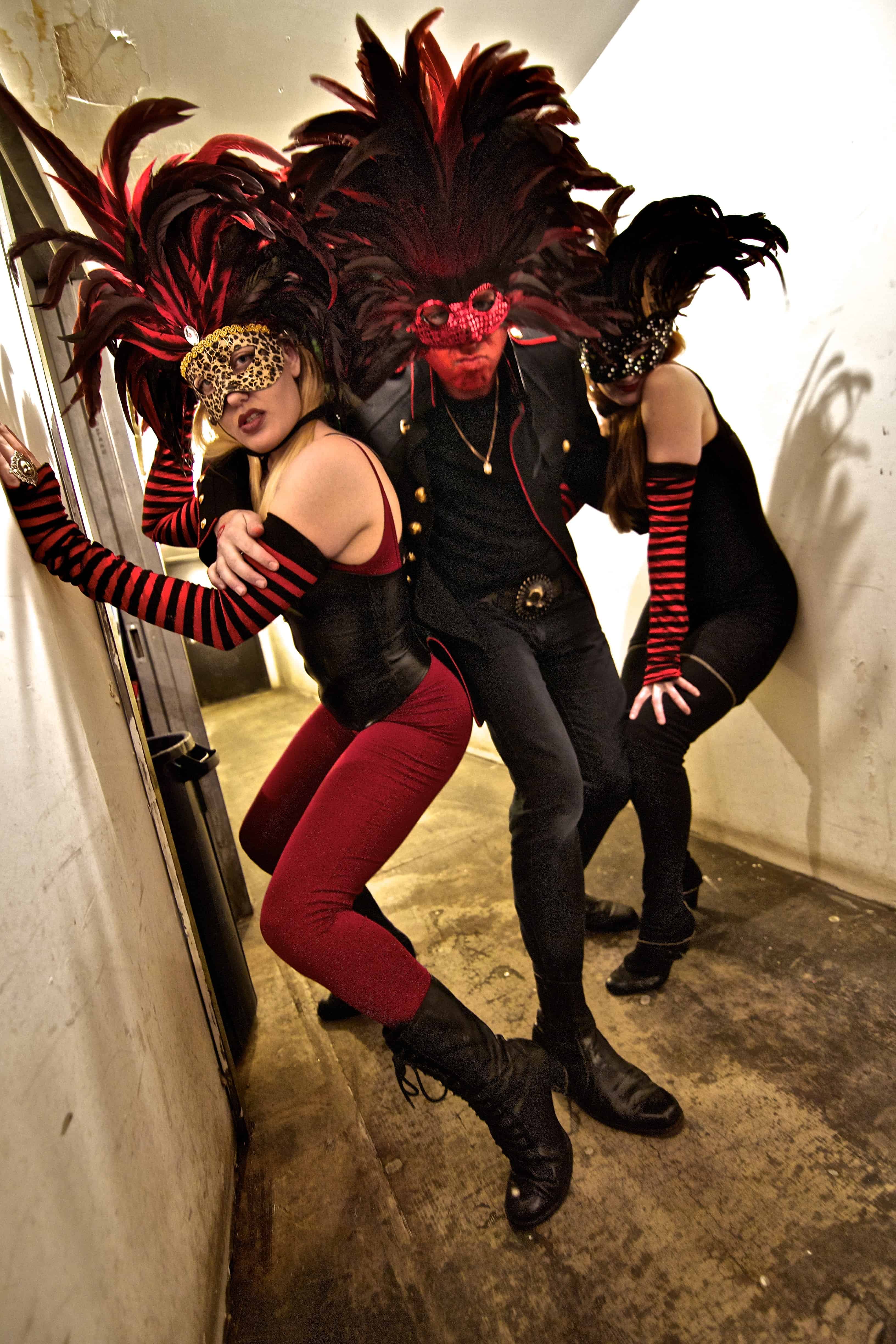 Just exactly who is Dolchnakov Brigade? And what, pray tell is “Palevish!?” This crazy band is a conglomerate of Punk, Avante Garde and New Wave and it’s lead singer / creator / producer, Yon Yonson is a wildly artistic young man with a thick accent—of undetermined origin—who wears face paint and masks and often dons a boxing robe while prancing around stage. Occasionally he looks like a wrestler ready to duke it out in the ring, at other times he seems more like Johnny Depp partying in New Orleans. Think of a wildly exotic Mardi Gras where Tim Burton’s characters and Guillermo del Toro’s “Pan’s Labyrinth” connect and you will find the aesthetic of Dolchnakov Brigade.

In the band’s “About Us in 92 Words” section they are described as, “Crawling Creatures, A Salt Shaker Half Full Of Cocaine, Bruce Lee, East Europe During The Third World War, The Past That You Never Witnessed”—and seemingly unrelated and random notes. However the “word” used most often to describe the band is “Palevish!” Palevish! (pronounced Pal-Eh-Veesh) is the concept of taking a seemingly random and meaningless idea and repetitively executing it with full conviction as if it were a matter of life and death…until it becomes the truth. It is also the name of the bootleg EP and the name of the tune that opens their shows. And while the word may be complete gibberish to Dolchnakov Brigade it has meaning. Even Yonson’s name appears to have deeper meaning, as “Yon Yonson” is actually a song, famously attributed from Kurt Vonnegut’s Slaughterhouse-Five.

“There’s a certain ideology behind everything done in this project. There’s a common thought is that if one puts a mask on, he kind of hides his ‘real self’ behind it. I believe that playing all these characters and putting all these masks helps reveal a more honest version of what we really are. When you’re not tied to a certain look or behavior, the limits disappear. You don’t have to match with any expectations. That is why this format of ‘different characters that share the same physical’ is where I express my true self the most. For the record I’ll say that I’ve been playing characters with masks and all for years. Forming Dolchnakov Brigade was just a way to route all that into a more of an organized form,” explains Yonson.

The second idea Dolchnakov Brigade stands behind is the technique of taking a completely instinctive or random idea and with as much intention possible…then building a whole world around it, hence Palevish! “I would have pieces of ideas and I would have no clue how I was going to put them all together. It’s kind of like walking in a complete darkness but just following your instincts. I’ll keep on making more pieces of the puzzle ‘til it all makes sense all of a sudden. This is how I usually write, compose or do anything else in this band. This is also how Dolchnakov Brigade was formed,” says Yonson.

We had a chance to sit with our friend Yonson to get answers to some of our most burning questions. Here’s what he reports:

M&M: What does a salt shaker half full of cocaine, East Europe during the third World War, and Bruce Lee, have in common with your music?
YONSON: Associations. We’re all about them. It’s what our music/live performance might remind you of and what you might think of when listening to our music or watching our performance. It’s a soup of fantasy and facts; a bit like Hunter Thompson’s Gonzo Journalism. ‘Salt shaker half full of cocaine’ is actually a reference from Thompson’s Fear and Loathing In Las Vegas. ‘East Europe during the third world war’ is the past that never happened. I love using this concept. Creating aesthetics that would seem like references from history that technically never really occurred. For instance, we often perform “ancient rituals” on stage, which in real life were made up backstage few minutes before. Bruce Lee…I guess we have a lot in common, because, just like us, he is straight up awesome.

M&M: Is outer space more like Star Wars or Alien?
YONSON: I assume you’re asking me that question because of our song ‘Dating In Space’. Well, to be honest, Dating in Space is a metaphor for one of the experiences you go through that is so intense to a degree that you ask yourself, where the fuck am I?? What is all this? Am I in space or what? It’s usually a positive experience. Everything feels strange and unfamiliar but still positive. However, to answer your question, The fact is, I’ve never been to space but I believe the future looks like neither of these movies but more like Zardoz, a sci-fi movie from the 70’s starring Sean Connery. Sean Connery is a human exterminator who wears incredibly kinky red outfit and worships the god Zardoz. Zardoz’s agenda is (and I quote) “The Gun is Good! The Penis is evil! The Penis shoots Seeds, and makes new Life to poison the Earth with a plague of men, as once it was. But the Gun shoots Death and purifies the Earth of the filth of Brutals. Go forth, and kill! Zardoz has spoken.”

M&M: Do you eat marshmallows, onions, more onions, and kosher dills when writing and before performances?
YONSON: I don’t think we eat more marshmallows and kosher dills than the average person but we do worship onions and have a lot of them in our shows (we don’t necessarily eat them…). When we play in smaller towns, where there aren’t any grocery stores open at night, random people will sometimes show up just because they’re hungry.

M&M: Dolchnakov Brigade’s Facebook page features an excerpt from the song “Yon Yonson,” in the About section. This song is best known from Kurt Vonnegut’s book “Slaughterhouse-Five.” Did you ever meet him?
YONSON: Yon Yonson is actually my real name. I’m named after my great grandfather, Yon Yonson (Jan Sophus Jansen) who actually wrote the song. He moved to the U.S. from Denmark in the 1890’s and lived in Berlin, Wisconsin. He used to walk around town and sing the song while playing his concertina. Unfortunately I never had the chance to meet Kurt Vonnegut but I’m a huge fan. Needless to say that my family and I feel so very honored to have my great grandfather’s song mentioned so many times in “Slaughterhouse-Five” and thanks to that, have his legacy immortalized.

M&M: Do you always live by the concept of “Palevish!”?
YONSON: Absolutely. It’s all the way or not at all. If you like the way ‘Saskatoon, Saskatchewan’ sounds, don’t be afraid, go ahead and scream it like it’s a matter of life and death.

M&M: Your live performances are very avant-garde. Ever think about collaborating with the Blue Man Group or Lady Gaga?
YONSON: It’s funny that you’re asking because we actually have a lot of friends that work as Blue Man in New York. Some of them actually participate in our shows every now and then. Not as Blue Man though but as other characters. As far as Lady Gaga; collaboration with her would be amazing. I like what she’s doing and the ideas she’s delivering about accepting the different. Lady Gaga is good for the kids.

M&M: None of your tours are going to California. Why no love for the west?
YONSON: No worries, we’ll get there! The Dolchnakov Brigade revolution has just started recently and we’re slowly expanding the radius of our travels. We can’t wait to hit your side of the country!

M&M: So far, what is your favorite city in the U.S.?
YONSON: I like traveling a lot. Even to the small suburban towns. Everywhere there are always great experiences and interesting people to meet but after long travels, it always feels amazing to come back to New York City.