Birds Over Arkansas ~ Behind The Lights EP 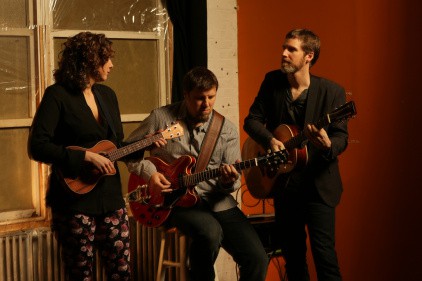 By Taylor Van Arsdale
Photos Courtesy of Birds Over Arkansas

Americana. Folksy. Upbeat and Harmonic. These are the words that come to mind upon hearing Birds Over Arkansas, which is curious considering they list their influences as: Yes, Pink Floyd and Frank Zappa (they sound nothing like these artists, BTW). But that’s not a bad thing, quite the contrary. As much we love Floyd, Yes and Zappa—there’s nothing like a bit of good Americana rock—and that’s exactly what you get with BOA’s new EP, “Behind The Lights.”

It’s also no surprise that the band’s tune, “Catapult”—an addictive little number—is now in rotation on Philadelphia’s 88.5 WXPN. The band, which consists of Scott Haskitt (lead vocals, guitars drums), Laura Hartshorn (keyboards and vocals), and John Mondick (guitars and vocals), formed in 2011 and its members hail from Philadelphia and Connecticut. The trio had guest musicians George Hrab playing drums and Carter Gravatt picking up lead guitar on the track, “Comet.”

Not to miss: “Elsa” an inspired song with heartfelt lyrics. Overall: Sweet and melodic, with complex orchestrations and tightly layered harmonies, listening to Birds Over Arkansas is like sitting down to a delicious meal. You’ll savor every moment.