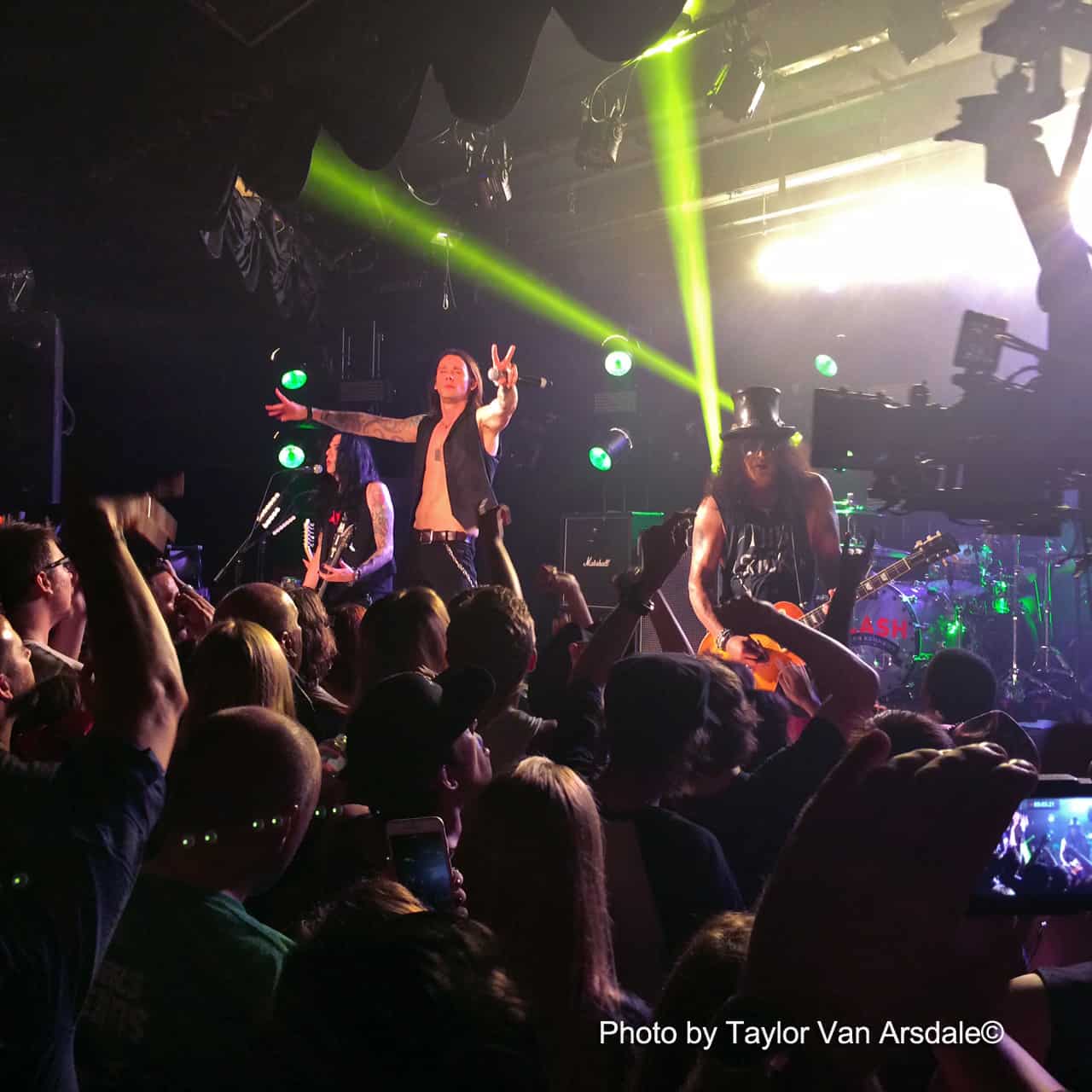 By Justin O’Reilly
Photos by Taylor Van Arsdale (except where noted by Ryan Hunter, Guitar Center).

Finally…a show with nuts!  No, not peanuts or cracker jacks — we’re talking rock n’ roll nuts; something sorely lacking in the music industry for a while now, but fear not—Slash is here!

It all came together at the legendary Roxy Music Theatre on September 25. In honor of the 50th Anniversary of Guitar Center, Slash and his band featuring Miles Kennedy & the Conspirators unleashed a plethora of rock & roll madness. The show marked the second of the bands’ three sold out club shows from the iconic Sunset Strip. Why was this so special? Well, we’re talking about Slash for Christ’s sake!  Saul “Slash” Hudson is undoubtedly one of rocks finest guitar players — ranking #2 behind Jimi Hendrix in Time Magazine’s “The Ten Best Electric Guitar Players of All-Time.” He’s a product of the Sunset Strip and more importantly, he’s a long time endorser when it comes to anything related to Guitar Center.  Roll out the red carpet for this dude. He’s a legend.

“Loaded like a freight train, flyin’ like an aeroplane, feelin’ like space brain one more time tonight.”  Yep, that’s how it all started Thursday night — righteous GNR riffs and lyrical content that’ made you feel like you’d been f*cked by a train. “The energy was through the roof,” said Courtney Bingham-Sixx (wife of Nikki Sixx). He jumped around, and strutted about the stage, fully equipped with his trademark top hat, Gibson guitar, tight pants and a shirt emblazoned with the text, “This Sucks” (with an arrow pointing down). It’s been almost thirty years since Slash rose to prominence and melted the stage with Guns N’ Roses at the Roxy. “The Roxy was perfect for this because the GNR days were before my time, so in a way I felt like I was getting to go back and hear some of my favorite songs at one of the first places where they started,” said Bingham-Sixx. Also in attendance was the former Guns and Velvet Revolver bassist, Duff McKagan, accompanied by his wife Susan, Billy & Rita Gibbons (ZZ Top), Wes Scantlin (Puddle of Mudd) and the lovely Perla Hudson (the wife of Slash) [see our Photo Section for more pics]. One can only imagine what might have happened to this rowdy crowd if Duff hit the stage during the GNR songs. Nonetheless, Slash and his band tapped into a ridiculous music catalog fueled by hits like GNR’s “Paradise City” and “Sweet Child of Mine,” and even “Slither” by Velvet Revolver. The band also highlighted fresh material from their new album “WORLD ON FIRE” which peaked at #10 on the U.S. BILLBOARD TOP 200 ALBUMS CHART. The title, “World on Fire,” is certainly apropos because it felt like they were blazing. Jude Gold of Guitar Player Magazine said, “Guns, Revolver and Snakepit were all cool, but Slash now playing huge crowds under his own name, and playing the music he wants to, has finally found his real dream band.”

WORLD ON FIRE is Slash’s third solo album and the second full-length album with Kennedy & the Conspirators. The band released “Apocalyptic Love” (2012) which climbed to #4 on the BILLBOARD CHARTS that year. Behind all the musical madness is solid band consisting of Todd Kern (bass) Brent Fitz (drums) and Miles Kennedy on vocals. “Slash fans are in for a treat for his third album. He and his cohorts, Miles Kennedy and the Conspirators, give you more band for your buck with a whopping 17 tracks and providing a little something for everyone,” said loudwire.com  “A lot of rock, a little blues, some definite swagger and songs that can get into your soul—what more could you ask for?”  Hmmm? How about a tour—please? If you’ve got the cash, feel free to purchase a ticket and join the band as they embark on a European Tour at the end of this fall. The tour will begin in Dublin, Ireland on November 10 followed by a strings of shows in Paris, Switzerland, Italy, Austria, Poland, Germany, the Netherlands, Belgium and last but not least, the UK.  Fitting for a guitar lad who was born in London and influenced by British blues and early rock & roll bands.

Slash is a bad ass. He’s sold millions of records, played with legendary artists, snatched a few Grammy Awards and appears on plenty of classic albums. Watching Slash, Miles Kennedy and the Conspirators play to a sold-out crowd at the Roxy—an amazing experience to say the least. It’s refreshing to watch a band with NUTS—it makes you realize Rock & Roll isn’t dead — it’s just buried underneath a ton of mainstream pop and other bullsh*t.

But if you missed it, don’t worry ‘cause you still have a chance to relive every moment by tuning into DirectTV (Channel 239) at 8pm on November 9, where the show will air exclusively as a 90 minute concert special entitled “Slash featuring Miles Kennedy & the Conspirators — Live from the Roxy.”

Thank you and congratulations to 50 years of Guitar Center — you rock!

Special Thanks to Libby Coffey and Sarah Chavey for making the event possible for Music & Mayhem. 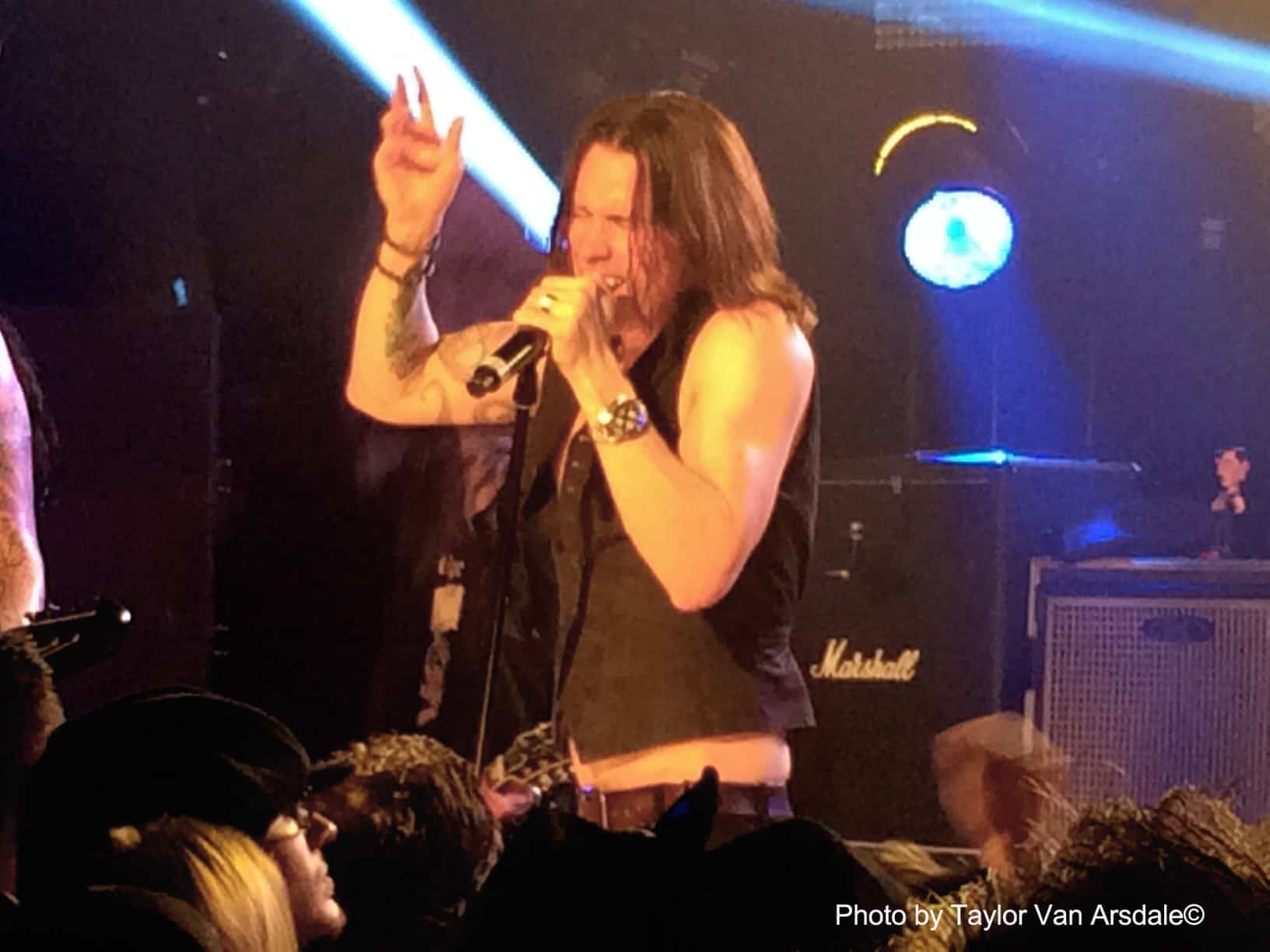 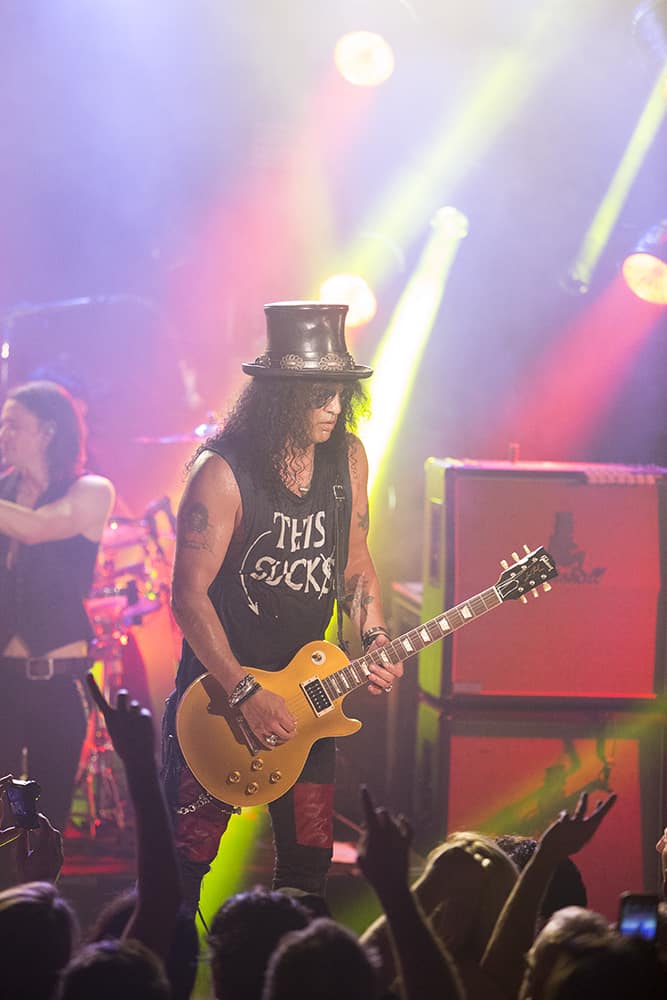 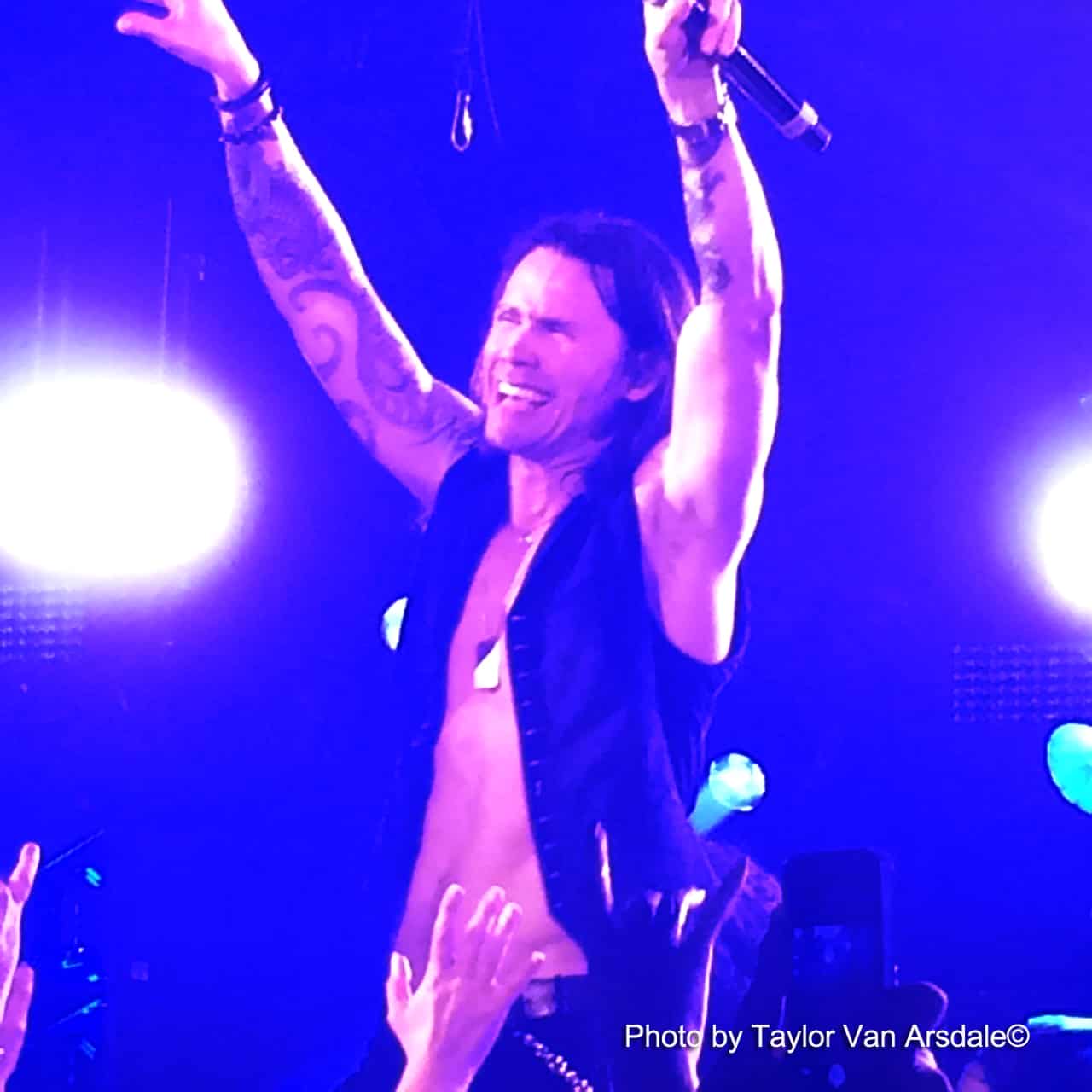