There’s really no “one-word” to describe iconic rock ‘n’ roll promoter Bill Graham. He was as much a legend as the legendary artists of the 1960s whose careers he launched—luminary bands such as The Grateful Dead, Jefferson Airplane, Janis Joplin and Jimi Hendrix to name but a few. He was also a humanitarian, a shrewd businessman—with the occasional erratic temper—an aspiring actor, a soldier, an activist, a friend and a father. To fully understand the scope of Graham’s life and accomplishments would probably take a decade—but fortunately the Skirball Cultural Center is running “Bill Graham and the Rock & Roll Revolution”—the first-ever retrospective about the life and times of the renowned music industry impresario.

Graham, who revolutionized the way rock music is presented, was once described by San Francisco Mime Troupe member Peter Coyote as “a cross between Mother Teresa and Al Capone.” Countless rock ‘n’ roll legends have performed at his famed Fillmore Auditorium, Fillmore West, and Winterland Ballroom in San Francisco as well the Fillmore East in New York City. 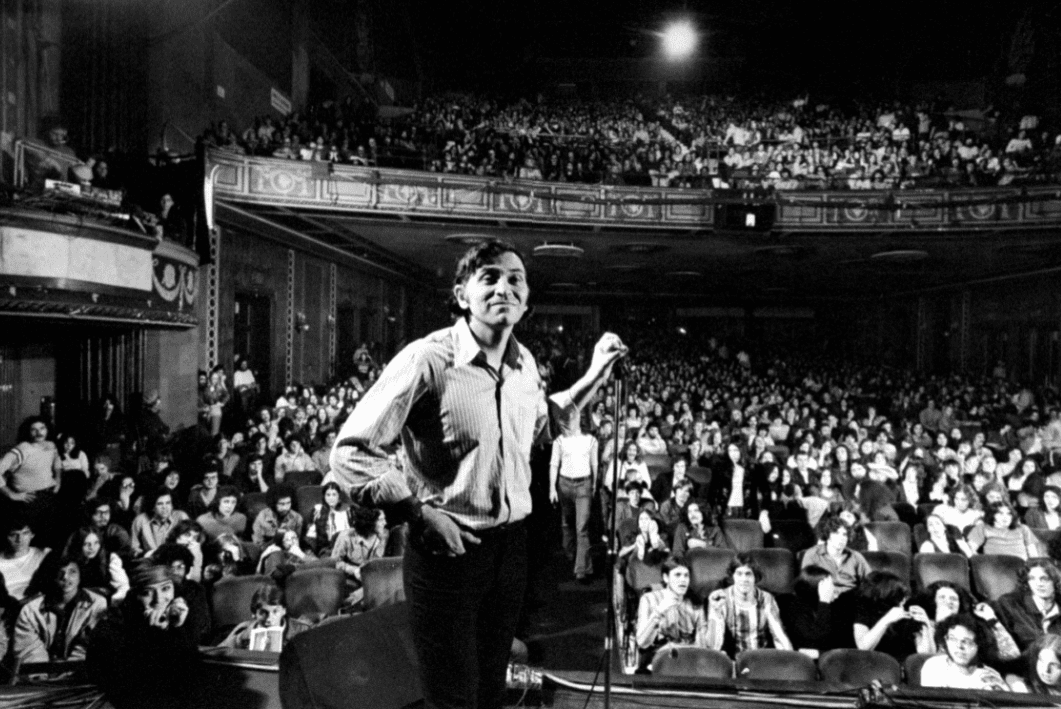 However, his story is far from one of easy entrepreneurship—after escaping Nazi Germany as a child, Graham arrived in America with nothing. No yamaka or prayer book and no information as to what had happened to him. An orphan who spoke no English, Graham had many challenges to overcome; and the retrospective, which runs through October 11, depicts how a determined, young man—full of chutzpah and hope could triumph over overwhelming odds to become one of history’s most influential concert promoters.

Through careful curatorship, the Skirball—with the help of Graham’s sons, Alex and David; along with key consultants, friends and loved ones—has assembled a retrospective that illustrates how Graham’s childhood experiences as a Jewish emigrant from Nazi Germany fueled his drive and ingenuity as a cultural innovator and advocate for social justice.

Just how these experiences informed his life, comes through a story Bonnie MacLean (his wife/artist) shared about the “apples” Graham put out for patrons at the Fillmore. “He always had a basket with a sign that read, ‘take one or two,’ but no one ever really knew the significance,” said MacLean.

When the curators began looking through Shoah testimony, Graham biographer Robert Greenfield found one of Graham’s childhood friends—Ralph Moratz—who was able to shed light on this story. Greenfield said, “Moratz told us how the children were sequestered in a chateau very near the Nazis. Food was scarce and the children weren’t allowed to go out.” With barely anything to eat, Moratz referred to their dinners as ‘salt soup.’ “At night Graham would bravely sneak out to the nearby farmer’s, steal apples, bring them back and give them to the children,” explained Greenfield. The Skirball has the actual apple bin on display and Moratz contributed many of the photographs of Graham’s life during this time.

Graham’s formative years were spent in the Bronx. As a young boy, he worked the Catskills resorts busing tables by day and playing cards at night. It’s interesting to see these early photographs—of Graham—his zeal and optimism shining through. After fighting in the Korean War—and being awarded the Bronze Star for valor—he eventually relocated to San Francisco just as the hippie counterculture movement was emerging. It was here Graham put on his first Rock ‘n’ Roll show—a benefit concert for the San Francisco Mime Troupe that featured the Fugs and Jefferson Airplane. He was thirty-four years old. 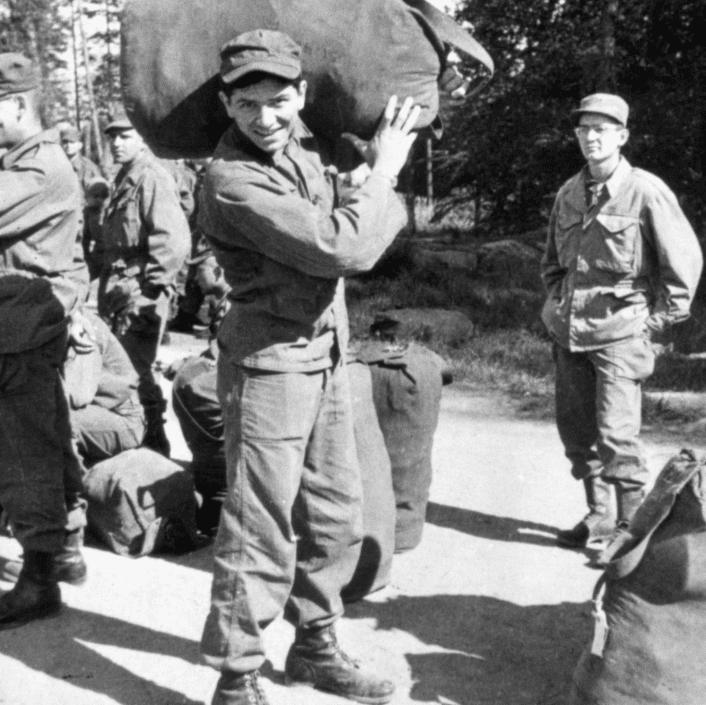 PHOTO Courtesy of David and Alex Graham
Bill Graham stands in his Army fatigues with a cap on his head and a huge duffel bag over his shoulder 1948.

Bob Barsotti, who worked for Graham for 30 years and currently produces the Kate Wolf Music Festival, said, “He worked your ass off all the time. Would call you at three in the morning if he needed to.” Barsotti also recalled some of his fondest memories were spent after the shows, “having a beer, bullshitting about the night, and that hour of camaraderie.”

To advertise his shows, Graham turned to the growing coterie of poster artists in San Francisco. The psychedelic style of these posters—day-glo colors and distorted typography with melting letters—soon became a signature part of the Fillmore’s promotion. Graham himself would put them up all over the city, offering a free poster to any shop owner willing to display one. Graham said, “Some were almost unreadable. I kept on saying to all the artists, ‘If you keep this design, the only thing I need from you is an asterisk. So we can explain it all on the bottom.’” 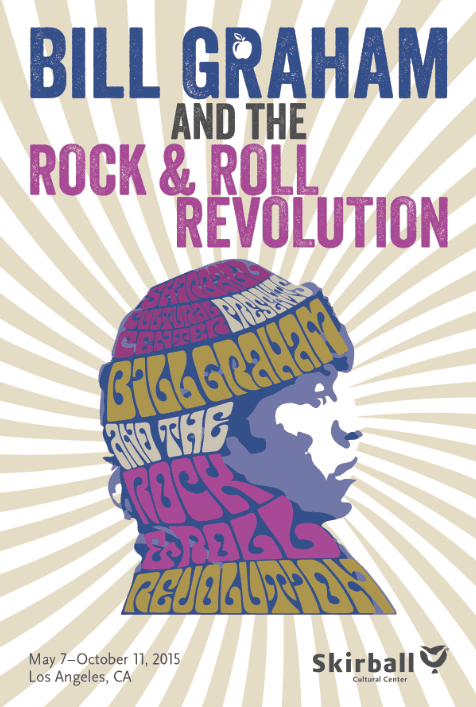 The exhibit and accompanying memorabilia explains many well, and many lesser-known stories about Graham’s ingenuity. For example, when the Carousel Ballroom was closing, Graham contacted the owner of the building, only to learn that he was in Ireland. So Graham flew all the way across the Atlantic and, after a bourbon-laced breakfast that went on for eight hours, returned to New York armed with a three-year lease for what was to become Fillmore West. Graham said, “There were all kinds of stories going around in San Francisco that I had bought the guy off or paid him under-the-table money. All I did was get up early. Anybody else in San Francisco who wanted that hall could have gone over there to see him. But I was the only one who did.”

His son Alex Graham, reflected on a favorite show he attended with his father, which ironically was not one of Graham’s own events. “The most incredible show I ever went to, with Dad and David, was when the Berlin Wall came down. Roger Waters was playing. It was a mind-blowing time and significant for Dad with the changes that were going on at that time. I’d never seen him so silent at a show, just taking it in. He was always so visceral and interacting and at that one he was just in the moment,” said Alex Graham.

When they weren’t in school [Alex and his brother David] were with their father, typically summers and holidays. This meant that they went to the highly anticipated New Year’s Eve Grateful Dead shows. Alex Graham showed me his father’s Father Time costume (also on display) and said, “He always had a passion for acting so his ability to get into that character was something he immensely looked forward to every year.” 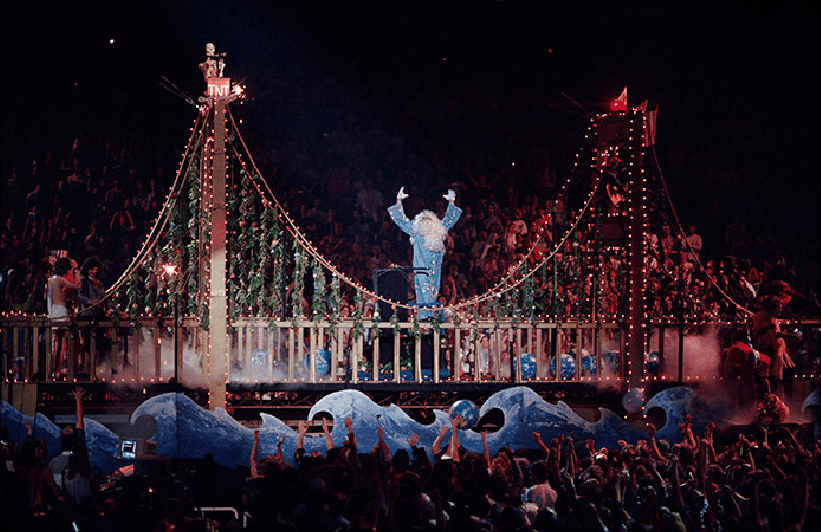 Look forward to checking out this exhibit. Amongst the rock ‘n’ roll memorabilia—Jerry Garcia’s famed “Wolf Guitar,” Keith Richards’ boots worn during the 1981 Tattoo You tour, the caftan worn by Grace Slick at the Monterey Pop Festival, a Fender Stratocaster fragment smashed by Jimi Hendrix at the Albert Hall, the 1959 Cherry Sunburst Gibson Les Paul played by Duane Allman during a live concert recording at the Fillmore East—it’s a daunting array of posters, photographs, archival concert footage, video interviews, ephemera, and psychedelic art.

Each week, we’ll be posting a photo from the exhibit with a little information and a link on our FB page. If you love rock and roll, you must see this retrospective! 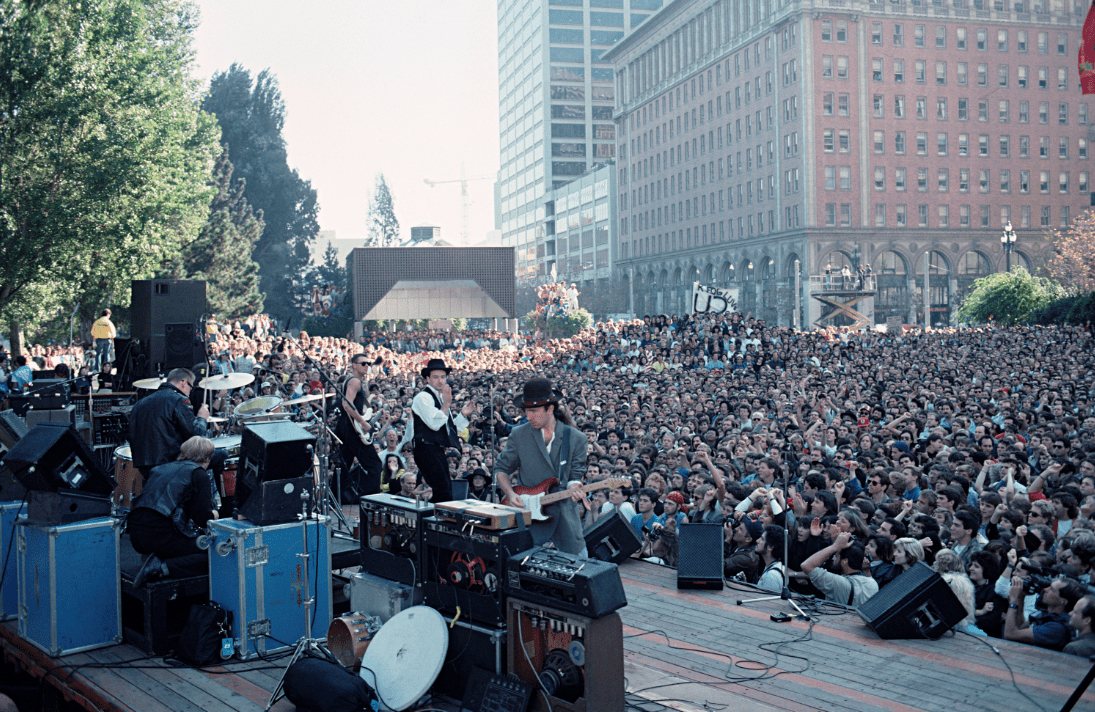