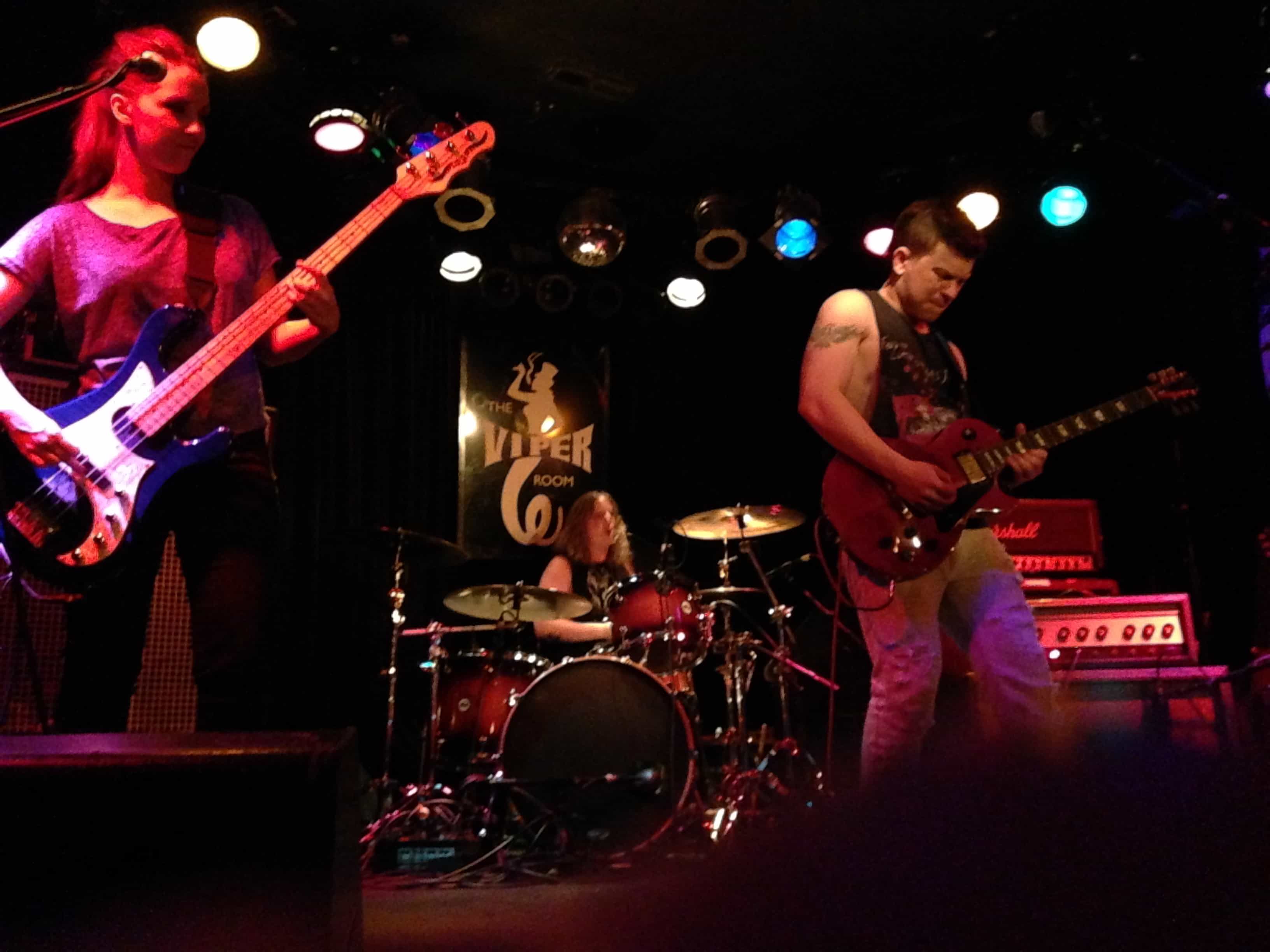 Decoded, Derek Jordan (vocals and guitar) and Heather Miller (drums)—with support from Liz Fohl on bass—played a rousingly hot set at the Viper Room on March 18. The show promoted the Deluxe Edition release of their 2013 EP Topanga and their energetic six song set, a mix of old and new material, did not disappoint.

“It was very Poppy, and nothing was any good… but I got Heather,” Jordan said. Miller added, “I’m the one that stuck, I’m the girl that stayed.” After the other girls left the band, Miller felt it was, “time to knuckle down and write some awesome stuff…and so, it was kind of the Heather-Derek show from then on.”

In August of 2013 they entered the studio with producer Davey Riley to create Topanga—a departure from those early Pop tunes. They recorded the EP over a few days, playing a lot of straight takes because, as Jordan explained, “We didn’t want an ‘overly produced sound.” They didn’t quantize any of their tracks. Jordan described the process as grueling, “It takes a lot out of you, and you recognize your weaknesses really quickly. Playing guitar, even the simplest [riffs] I had to do over and over again, ‘cause it had to be perfect every time.”

Jordan, who used to use a Marshall amp, switched to a Silvertone for the first time, and he fell in love, “Its just vintage, and it’s warm, and it’s just really unique.”

The two band members bring a variety of influences to form the sound of Decoded. Miller loves 80s metal, Guns N’ Roses, Motley Crew and claims Aerosmith as her all time favorite. “When I was in high school I used to listen to “Appetite [for Destruction]” and be like, ‘Oh my God, I want to move to LA. I want to be a drummer,’ never ever thinking that I would ever actually move to LA and be a drummer. Every day I wake up and wish the sunset strip was still like 1985 and there were bands playing every night and people everywhere.”

The scene has changed a lot in West Hollywood since that time. “I think the bands are very supportive of each other. We all go to each other’s shows; a lot of the people that came out to see us tonight are in bands. That’s huge, cause I’ve heard stories that back in [1985] where everyone was real competitive, but now you have to work together. You have to build your own career as a band. It’s really a grass roots thing, and eventually maybe you create a business partnership, but it’s the bands working together that makes [success] happen.”

Jordan, has a 90s rock background, though he said he learned guitar by listening to Led Zeppelin, but loves Nirvana and Muse. For him, he’s inspired by good song writing and counts the work of Taylor Swift right up there with Tom Petty and Bruce Springsteen.

Miller and Jordan count Dead Sara, a local LA group, as a mutually important influence, since a gig they attended led them to their current producer, Vanessa Silberman, and her label, A Diamond Heart Production. Silberman, who has her own band Diamond Under Fire, was at the March 18 show and came up on stage to play guitar on a cover of “California Love” by 2Pac.

“The relationship started out kind of “stalkerish,” Jordan said. “There were five names during the beginning of the 2014 that I wanted to befriend, and [Silberman’s] name was one of them.” They became friendly at a Viper Room gig when Silberman asked if they wanted to record a Decoded song for her development label. “She believed in us, helped us a lot with our sound, and our shows. It’s been awesome working with her,” Miller added. Silberman is producing their next EP.

Jordan wrapped up the show by dancing around the stage and peeling off his shirt before the last song, then asking the audience to “take their shirts off” too. All in all…a hot night. 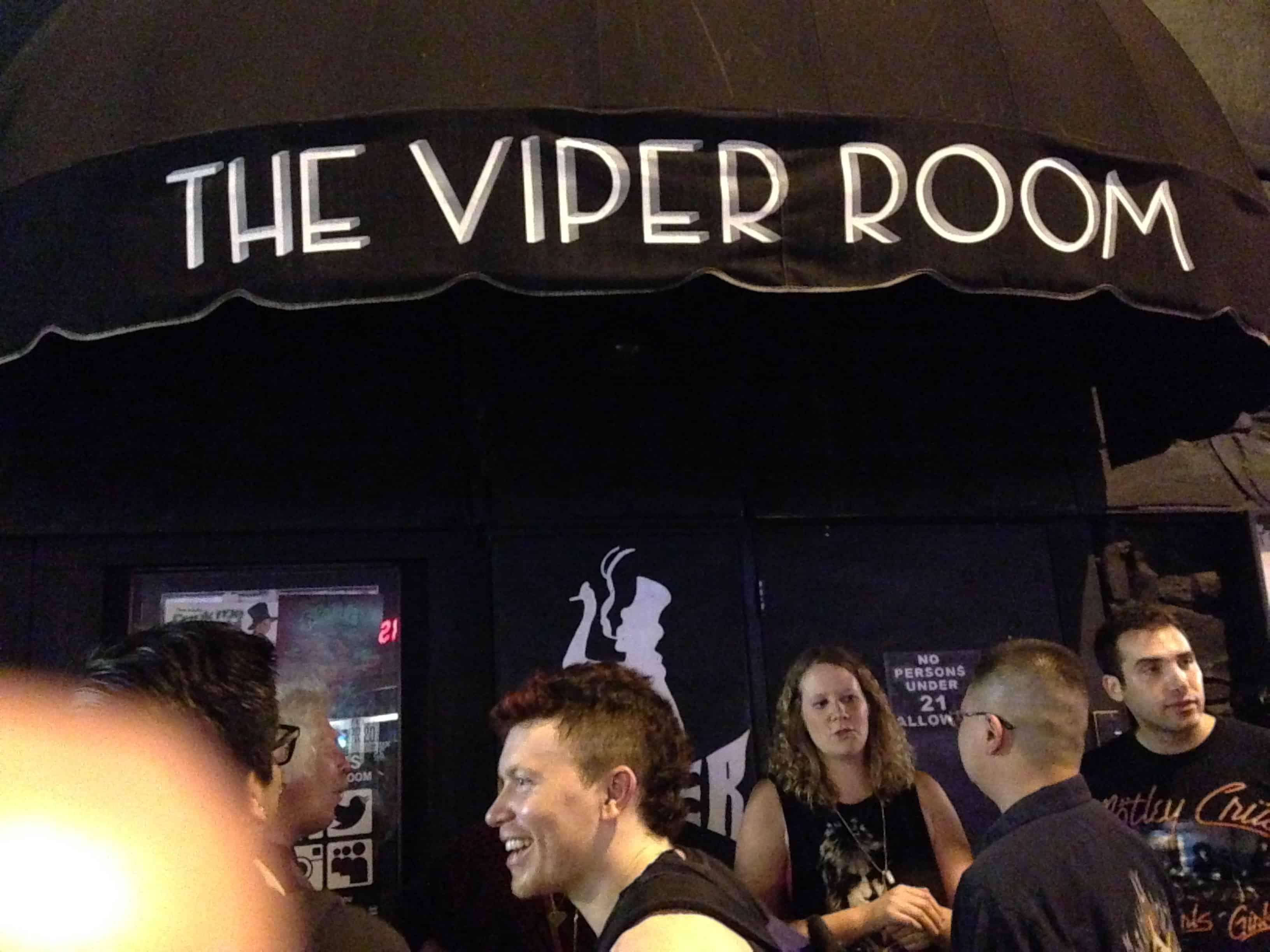