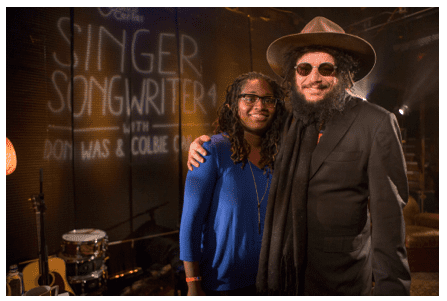 The show began with three of the past year’s winners—Josh Doyle, Jeff Campbell and Tess Henley, performing a song or two a-piece, and then coming together for a familiar musical number by the Beatles, “Don’t Let Me Down.” Doyle, the first year’s winner, kicked off the show with a rousing number entitled “Aphrodite.” He stopped and started a bit, summing his hesitation up to nerves, but also because the show was being taped and he wanted to make sure the version he delivered was the best it could be. He ought not to have worried though because his performance was solid. Doyle, who had never been to the venue, said, “It was great to perform at the Troubadour because of the history there. Leland Sklar who used to play there with Jackson Brown and James Taylor sent me his ‘Troubadour Good Luck.’ It was also a good chance to perform in front of influential folks like Don Was.” Doyle confessed he was able to sneak in a few of his own fans too in order to, “make it feel more like home.”

Amongst this year’s competitors were: Kat McDowell, Anna Johnson, Bennett Glasscock, Joe Marson and Lanita Smith. We had high hopes for the ginger-haired Marson, who—with his soulful voice and bluesy guitar style—we thought would be a shoo-in for the win.

While the winning votes were being tallied; and decisions from the rafters being made, we spoke with Marson about the process of getting to the finals. He entered the contest when, “A friend saw it online and alerted me to the GC page,” he said. Marson sent in six videos. He asked friends and fans to go and watch them and promoted the links through his Facebook page. “Then I forgot about the contest until I received an email almost three months later saying I was being considered as a finalist.” Just to give you an idea of the caliber of these performers–over 16,000 people submitted videos—a staggering number of contestants. “I feel pretty lucky. The entire event has been a great experience. [Guitar Center] flew us out and put us up at the Sunset Marquis. We’ve been in town for two days and we’re having a great time.”

Memphis native Lanita Smith took the $25K prize which includes the opportunity to record an E.P. with Was, mentoring by Grammy Winning singer-songwriter Colbie Caillat, new gear, a feature on the award-winning web-series: At: Guitar Center with Nic Harcourt, a feature story in American Songwriter magazine and a performance on Jimmy Kimmel Live!

The evening concluded with a special live performance by Caillat. Caillat has a gentle way of putting her audience at ease and the March 6 show was no different. Joined by guitarist Fredrick Halland, she performed eight songs—amongst the standouts were, “Fallin,” “Lucky,” “I Never Told You,” and a beautifully moving piece, entitled, “Try” a message of self-love aimed at women. Caillat opened up to the crowd, letting everyone know that she sometimes doubts herself and her place in the world. It’s hard to imagine the sophisticated and polished Caillat feeling like an outsider—but that just made her more likable.

For more information and to view the finalist’s winning videos: www.guitarcenter.com/songwriter 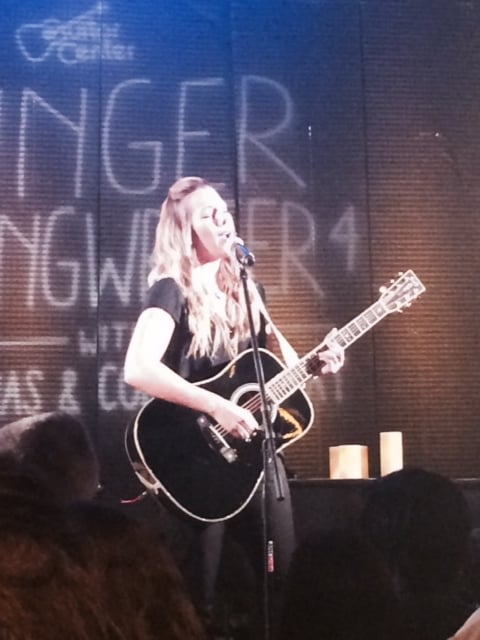