Photography Courtesy of the Skirball Cultural Center and Robert Landau.

Looking for an incredibly cool glimpse into the iconic Sunset Strip? Head on over to the Skirball Cultural Center beginning March 24 (through August) for a FREE presentation of Rock & Roll Billboards of the Sunset Strip, featuring works by Los Angeles-based photographer Robert Landau.

More than twenty photographs from the only extensive collection of images that capture the hand-painted, temporary billboards that lined L.A.’s fabled Sunset Strip for almost two decades will be on view. Taken when Landau was just a teen, the photographs document the emergence of an expressive art form uniquely suited to the city of L.A. and bring to life a colorful and fleeting period in American popular culture. They trace the cultural phenomenon of rock billboard advertising from its inception in 1967—with the promotion of the Doors’ debut album—to the advent of MTV in the 1980s.

In 1967, head of Elektra Records Jac Holzman, took the bold step of renting out a billboard on West Hollywood’s historic Sunset Strip to promote a little-known L.A. rock band called the Doors. For the next fifteen years, the Strip exploded with the vibrant new form of commercial art form. Once the Doors had paved the way, everyone from the Beatles and Bob Dylan to Frank Zappa and Led Zeppelin wanted to be represented on the one-of-a-kind, hand-painted wooden megaliths that lined Sunset Boulevard. In those years, the Strip was the heart and soul of a vibrant music scene—home to legendary nightclubs, record companies, and record stores. From the 1960s to the 1980s, rock & roll billboards dominated the Strip, looming over the legendary mile-and-a-half stretch for just a month or two at a time before being dismantled, whitewashed, and repainted. Photographer Robert Landau, a teenager at the time, was there to document these ephemeral masterpieces, crafted by teams of rarely credited artists, designers, photographers, typographers, and installers. His photographs offer a glimpse into L.A.’s past, portraying both the city’s infrastructure and inhabitants at the time.

Landau was born and raised in Los Angeles and credits his first Nikkormat camera with transforming him at the age of sixteen from “an awkward bystander to a purposeful observer.” Throughout his career, Landau has compiled a vast archive of images depicting the unique characteristics of L.A.’s urban landscape and reflecting the city’s offbeat character. This exhibition is based on Landau’s fifth book, Rock ‘n’ Roll Billboards of the Sunset Strip; previous works include Outrageous L.A. (1984) and Hollywood Poolside (1997).

Admission to Rock & Roll Billboards of the Sunset Strip is free every day. 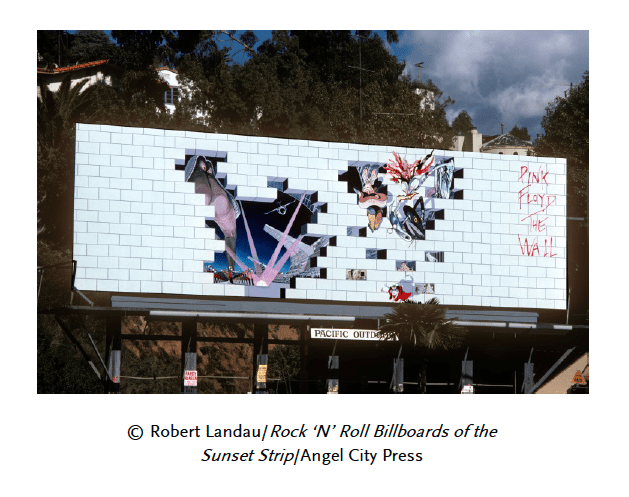