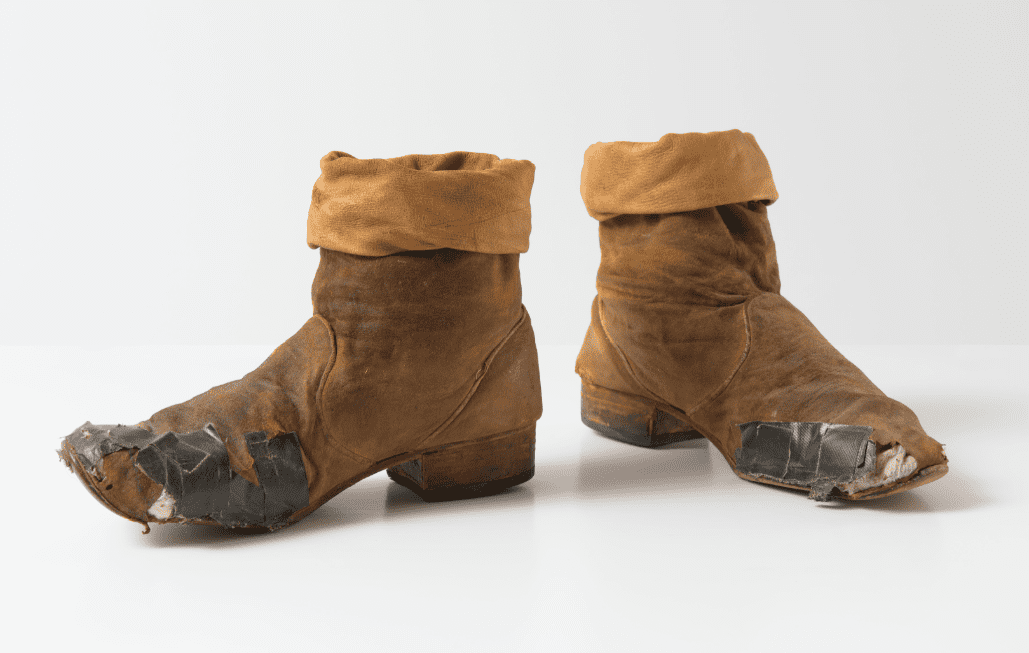 Photo by Robert Wedemeyer
Boots worn by Keith Richards of the Rolling Stones during 1981 Tattoo You tour 1980, presented to Bill Graham in 1982 From the collection of David and Alex Graham

After a long and involved courtship, Mick Jagger finally agreed to let Bill Graham take the Rolling Stones out on a nationwide tour of America in the fall and winter of 1981. Of this tour, Graham historian Robert Greenfield tells the following story, “One night Bill opens Keith Richards’ door and yells, “Five minutes!” and Keith is squeezing a lemon into his hair to bring out the highlights and he looks at Bill as if to say, “What did you say, Man?” Bill demurely backpedals, throws his hands up and says, “Whenever you’re ready Baby.” Later that night, Keith discovers that he can’t go on because the heel of his favorite boots is busted. Bill is possessed. He takes the boot and goes running through the backstage area. He’s looking at everyone’s feet, saying, “Can I look at your shoe, please? What size shoe do you wear?” He’s looking for a heel from somebody’s shoe. Bill in fact did take the heel off of somebody’s shoe and nailed it onto Keith’s boot. The Stones had a fabulous show and did the entire tour. When the tour ended, Keith called Bill up to his trailer. He said, “Bill you’ve been a driving asshole, but you made it happen. We’ll never go out on tour without you again.” He gave him a rose and something wrapped in newspaper—which are the boots you see pictured here.

Richards’ boots are on display at the Skirball Cultural Center and are a part of the “Bill Graham and the Rock & Roll Revolution”—the first-ever retrospective about the life and times of the renowned music industry impresario. The exhibit runs until October 11. Be sure to check it out!