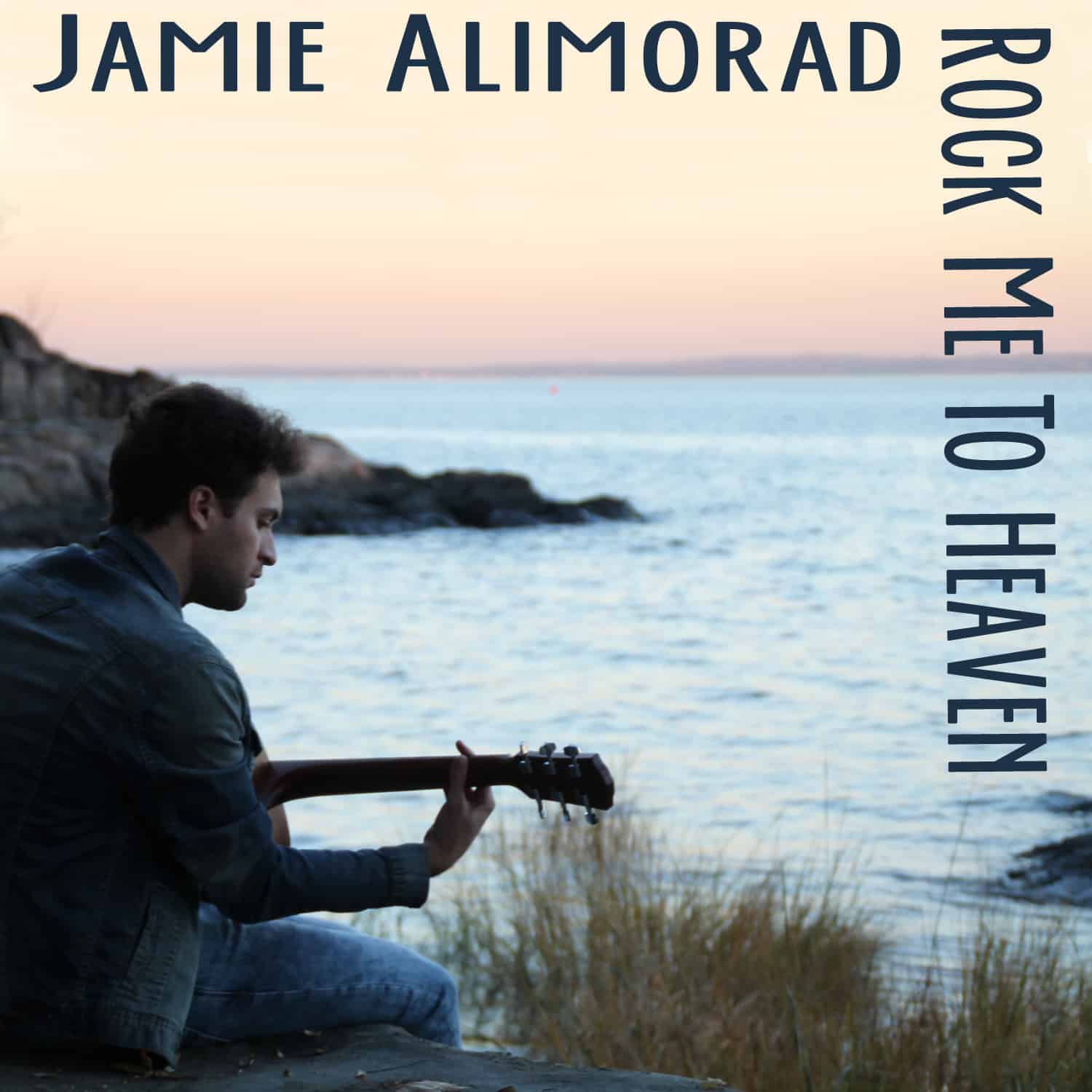 Jamie Alimorad debuted his newest music video “Rock Me To Heaven” and we got a chance to do a deep dive into his project—an album—with its title still to be determined, his inspiration for his video and impetus for his change in musical direction. For those of you not familiar with this independent artist we got to meet Alimorad when he was nominated for “Rock Artist” at the 2013 Artists In Music Awards.

Check out his video here: https://www.youtube.com/watch?v=S4XfrEJJDTk and then read our interview:

M&M: First of all the video is amazing. Now, this looks and sounds like a change in direction for you—what brought this about? And who were you / are you working with that influenced this direction?

Jamie Alimorad: I can’t really begin to talk about a visual change in direction without first touching upon the stylistic change musically. I’ve always been a pop/rock guy, as a fan and as an artist, but when my producer Gino Vannelli and I began talking about the direction for the album we couldn’t look forward without examining back. He brought a lot of things to my attention about what I had been doing and how it had been presented, and he felt he could tap into something that I hadn’t done before that would stand out. We started to develop a more natural and organic sound, with compelling lyrics that told a story first and foremost.

M&M: Yes, it’s such a beautiful video and the song is definitely story-driven and catchy. Was this the original concept that we are seeing or did it evolve into what it is now?

Jamie Alimorad: The video for “Rock Me To Heaven” went through several iterations. This project started as an EP and after a successful Kickstarter campaign last year, we were ready to go. Then a great thing happened, there was some label interest so Gino and I determined the best way to move forward was to record a full-length album.

Jamie Alimorad: Yes, thank you, it was and is, however we still need to get more funding, so “Rock Me To Heaven” really serves as a sample of what we’re doing; a taste of what’s to come. Obviously those who contributed to the Kickstarter were made aware of the project expansion, and the response from supporters was overwhelmingly positive—even though they will have to wait a tad longer for the music to be released.

M&M: So “Rock Me To Heaven” in effect, has the triple duty of appealing to the casual listener, music fan and also potential investors.

Jamie Alimorad: Correct. And as such, we needed to make sure that we were conveying concepts for several of types of viewers. And when we were putting together concepts for the video, we tried to keep all these elements in mind. Right off the bat, there were two ideas. One was to feature a love interest and I going through our respective days only to wind up together. This iteration went along with the lyrics very well. The other was more of a performance video in a warehouse with a full band. The production team and I compromised and brought elements from these two ideas together for the shoot. Unfortunately scheduling problems arose and shooting got pushed into a small window where everything had to be moved to a certain date or the video would have had to have been put on an indefinite hold. When this happened, I came up with the concept for the video that we ultimately released. It was different for me and I have to admit I was a bit scared, because this was the first time one of my videos wasn’t really story-driven through its characters; instead it was just me going through my day singing the song.

M&M: Well it came out great and you look really comfortable in the locations.

Jamie Alimorad: Most of the spots actually have a lot of meaning to me with this lyric particularly, and I love the way it turned out.

M&M: It’s got such a Richard Marx vibe to it. Who are your musical influences?

Jamie Alimorad: It’s so funny you mention Richard Marx. I love his work and I’m a huge fan. As for my musical influences, everything from Gino Vannelli to the Tubes, The Beatles to the Backstreet Boys, and Van Halen to Hanson. I’ve really always been driven to artists that have strong melodies and good harmonies. My father is a singer and performer, and he raised me to appreciate a good melody line. Anything that brings out the singer in me gets to me first. There are genres I favor over others, but a good song is a good song and there are no boundaries to that.

M&M: When will you have the other songs ready?

Jamie Alimorad: We’re scheduling the sessions as we speak, but we can’t really go forward until we have all our funding in place. I’m recording more demos, so on the bright side we will have more time to review songs and really pick as many A sides as possible. Are A-sides still a thing?

M&M: I think A-sides will always be a “thing.” How long did the shoot itself take?

Jamie Alimorad: The video was shot in one day. My call time was 9:00 a.m. and we wrapped up around 10:30 p.m. It was a fast shoot and honestly it felt effortless. I’m sure the crew will tell you differently, but it didn’t feel like work being on camera for this one.

M&M: How long did it take to write the song for the video?

Jamie Alimorad: This is a song Gino actually wrote for his album These Are The Days. I remember the first time I heard it and I was immediately captivated by it. That version and the one he and I did together are very different tracks. The original has a pop, jazz, beach feel to it, and the instrumentation is really unique. I don’t think I’ve ever heard upright bass and steel drums on the same track before. My version has a pop, Nashville vibe to it. Both are great, but how can you not be pumped to have a version of a song you’ve loved so long all your own?

M&M: Is this song about a particular girl or can you not say?

Jamie Alimorad: Well the original version always had a particular girl come to mind, but that’s so long ago. It’s a new day, a new time and there is someone in my life who brings out the emotions and feelings I sing about in this song.

M&M: The video looks amazing—you said earlier that you were familiar with the locations. Did anything special happen while you were shooting?

Jamie Alimorad: We had an unseasonably warm Autumn day to work with and we needed golden hour for this shot I wanted. In October that means you don’t have a lot of time. We were filming on a boardwalk and as on any warm day, people were out running, walking their dogs, and there I was with my acoustic guitar singing a song. Most people didn’t really know what was going on they just thought I was a street performer. We had playback, but I was singing and playing on top of it, and certainly loud enough to be heard. As we continued filming a crowd started forming and they had to tell people to move away because they were creating too much shadow. As the sun was setting my director was getting more and more worried and animated that people needed to move because they were affecting the shot. We did get enough material to use obviously and you can see a really cool shadow happening in the beginning of the video where someone walks right in front of me.

M&M: What’s different about the writing process you’re going through now—what’s it like working with Gino Vannelli?

Jamie Alimorad: Gino has really pushed me out of my comfort zone. Actually he picked me up and threw me right out of it. I have been writing songs for a long time and have largely had a similar process overall. Each song is different, but generally you have a routine that you go through in certain situations. Lightning does strike, but often it’s a process to write. This time the emphasis was on lyrics. I always went for catchy lines or some satire, but Gino pushes storytelling. I’ve done some story telling in songs like “Tiffany” and “Crawling Back To Me,” but not to the level that he expects. In the beginning it was back to the drawing board…a lot, but now I feel much more confident in what I’m doing and when I read what I have it certainly does stand out against what I’ve done before.

One night, I brought in a song called “One Moment” and we spent hours, literally hours on going over these lines and I can remember spending about 30 minutes debating one word. The argument was that the beginning of the phrase was so strong, but the ending did not match its passion. A subtle change from “Word A” to “Word B” did make all the difference. At the time you don’t think much about it, but when you sing into the mic and hear the playback you get why it’s so important. Working with Gino brought something out of me that I didn’t know it would.

Jamie Alimorad: Right now we’re doing promotion for “Rock Me To Heaven” and building as much momentum as we can for the song. It’s a beautiful track and I’m happy people are enjoying it. We’re working hard to secure the remaining funding needed to finish the album. It will take time, but I’m confident in what we’re doing. This is the best music I’ve ever written and worked on and Gino is the most incredible artist, producer and guide for me and this project. It’s really exciting and humbling to be working with someone you’ve idolized for so long and for him to put in the passion and dedication to make this album stand out. I can’t wait for people to hear it.

tagged with Gino Vannelli, Jamie Alimorad, Rock Me To Heaven